The Road to KDE Devland – step 0

Want to start to develop for KDE? Sure do. But how, and where do I start? Is it even possible for me to do something this complicated? The questions are many, but it’s not always easy to find the answers.

I’m just another person who wants to walk the path to “KDE Devland” – but I also want to leave something behind. Footsteps. Footsteps that other hikers can follow if they want, footsteps to show that anyone who’s motivated enough can walk this road.

There are mainly two purposes of the “Road to KDE Devland” series:

To avoid getting off route, I’ve set up a goal to reach within a time frame. I think I’m much more effective this way, and it’s also a great motivation to get you started. Do you know about the “100 pushups in 6 weeks” site? I’ve never liked to “train for the sake of training”, but I gladly accepted this challenge – just because it sounded like fun. 100 is a nice number, and while you know it’s likely to take more than 6 weeks, it still gives a rough idea of how much time you have to put into it.

My goal is to write a KDE application – probably a plasmoid – by the end of summer. It’s going to something very simple, but you have to start somewhere, right?

I’ve already mentioned the time frame: a summer holiday, which is about 2 months. That’s also why I’ve decided to call this “my” Summer of Code project, an obvious rip-off of Google Summer of Code (which I hope to participate in sometime in the future). 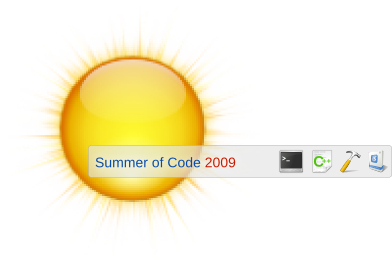 Kudos to the Oxygen artists for the icons. And sorry about the pixelate sun, but the svgz file was about to kill my netbook.

This isn’t going to be a guide about how to become a KDE developer. There are many roads leading there, and I’m just going to write about the path I walked.

In the same way that you don’t do pushups 24/7 in order to reach the goal of 100 consective pushups, I won’t sit in front of the computer the whole summer. On avarege, I plan to spend a couple of hours a day on this.

Due to some circumstances, I wasn’t able to blog about this until now in the middle of summer. Just remember that the posting dates aren’t in sync with my actual progress.

And lastly, if you’re not interested in programming this isn’t for you. Fortunately, there are a lot of other ways to contribute to KDE! Since I didn’t see BugSquad on that page it gets a special mention.

Next time I’m going to write about which books I’ve equipped myself with, and some online resources I found useful as a starting point.

Posted in KDE, PlanetKDE, The Road to KDE Devland. 13 Comments »