Dvorak – Two years later, was it worth it?

It’s been almost two years since I picked up a new keyboard and started to learn Dvorak. Looking back, was it worth the time and effort? Did it mess up my QWERTY skills? And which layout do I use today? That’s some of the questions I’m going to answer in this post.

First of all, what is Dvorak? Since you read this post, I’m sure you already know a little bit about it – for example, that it’s a keyboard layout developed by August Dvorak and his brother-in-law William Dealey. An example of the Dvorak Simplified Keyboard layout (United States version) looks like this:

The standard layout nowadays is QWERTY (although some countries use other layouts, such as AZERTY), named after the first six characters on the top row. If you use QWERTY, look down at your keyboard. Have you ever wondered why the keys are arranged in the way they are? It’s not very easy to find a pattern.

Sometimes one can hear that Dvorak was designed to be efficient, while QWERTY on the other hand was created to slow typists down. You could argue about the former, but the latter is just a common misunderstanding. If you want to learn why (and how) the two keyboard layouts were invented, and find out more about Dvorak in general, I highly recommend The Dvorak Zine.

Why I started with Dvorak

Being someone interested in computers, I had heard about this strange keyboard layout called “Dvorak” a long time ago. But that was all I thought about it – a strange keyboard layout. Sure, it could be better than QWERTY, but having to learn how to type on a weird layout you won’t find on other computers didn’t sound like a good way to spend your time.

One day, almost two years ago, I stumbled upon a review of some ergonomic keyboards. Generally I don’t like ergonomic things (to me, most seem to say “hey look at me, I have nice curves!” or “let’s see how long your wrists will last”), but two keyboards caught my attention: Kinesis Advantage and Typematrix EZ Reach 2030. 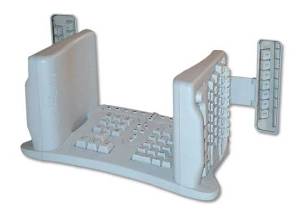 This one caught my eyes as well, but in a less positive way

I had seen both before, and I knew a friend who owned a Typematrix. It looked and felt nice, so I decided to check out their homepage. Soon I was reading the Features page and watching their video presentation, which you can see below:

Even though the video itself might not be that impressive (and I’m not only talking about the music), the content in it made sense to me. The reason keyboards look the way they do today is because people got used to it, not because it’s been proven to be better than alternatives.

Around this time I also got more interested in Dvorak and read a little bit about it. I knew from before that the Typematrix keyboard included a Dvorak layout – this seemed like a good opportunity to kill two birds with one stone, get used to this new keyboard and learn to type Dvorak on it.

But before that, I did some research. A lot of searching and reading other people’s experiences. Learning a new keyboard layout isn’t something you do over one night, and I had a lot of questions – just to mention a few:

Let’s see what answers I came up with:

I had reached a conclusion. Before buying the keyboard, I asked the friend where he had got his Typematrix EZ Reach 2030 and the shipping/total cost. Turned out that he didn’t use it anymore and asked me if I wanted it. Woah, seriously!? The answer shouldn’t be too hard to guess.

And so my Dvorak adventure begun.

The answers in the previous section were based on what I had read and heard about Dvorak. After two years, I can give answers based on my own experience. Let’s start with an easy one – was it worth it?

The biggest advantage of Dvorak, as I see it, isn’t increased speed as one might think. Sure, my overall typing speed has increased roughly 40 % (it’s hard to give an accurate number since I haven’t made many measurements), but that’s not the main reason I use this layout. It’s about comfort.

With that said, I’m sure there are many who still want to know my typing speed. My average speed on QWERTY was around 50 WPM (words per minute, net speed). I didn’t do many typing tests with QWERTY, but I would guess that my maximum speed was slightly above 60 WPM.

My current comfortable typing speed on Dvorak is ~70 WPM. I’ve typed above 90 WPM, but I wouldn’t call that “comfortable”. As you see I’m not a speed monster (yet?), and I’m sure many QWERTY typists type faster than me on Dvorak. But speed isn’t the only thing that matters to me.

Given the fact that I’ve typed QWERTY for about 16 years and only 2 years Dvorak, the improvement might sound pretty good. After one week I typed around 30 % of my QWERTY speed, after 6 weeks I had regained my original speed. And then it just continued to improve, little by little.

I want to add, however, that the increased speed isn’t only due to the switch to Dvorak. Previously nobody had taught me how to type properly – I used my own technique I had developed as a child. It’s a variation of the common form of typing know as “hunt and peck“, but without the “hunt” part. I could type fine without looking down at the keyboard and used all fingers except my left thumb. Maybe “finger waltz” is a better name for it.

When I learned Dvorak I had to start from scratch anyway, so it was natural to learn touch typing in the process. This was well worth it – not only do I type faster now, my accuracy has got a lot better and my bad habit to look at the keyboard from time to time (even if I didn’t need to) is gone. As an additional bonus, it made it much easier to learn the commands in applications like Vim and Nethack. 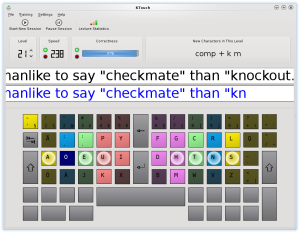 This combination of Dvorak and touch typing made typing much more pleasant. Common words such as “the”, “that”, “do(es)”, “he”, “she”, “it” and “hans” can all be typed from the middle row, often called the “home row” (because that’s where you keep your fingers when at rest). Reducing the need to reach for the other rows makes a difference if you type thousands of words every day. With Dvorak and touch typing my fingers move less and in a more natural way compared to my old form of typing, which involved a lot of hand movements. Now I barely move my hands at all.

What about my QWERTY skills? In the beginning, I felt clumsy when typing on a “normal” keyboard with QWERTY. However, to my surprise, my typing speed hadn’t decreased much – maybe about 10-20 %. I regained this loss after typing on QWERTY for a few days.

Now I’ve also started to learn touch typing with QWERTY. It’s definitely easier than when I started with Dvorak – my fingers are already used to touch typing, and my brain know the approximate arrangement of the keys in the QWERTY layout. If I were to learn both layouts from scratch, however, I think Dvorak would be the less painful one. It’s more logical, and you can start typing words with a few letters from the home row.

My opinion is that Dvorak is the superior keyboard layout of the two, but I have to accept that QWERTY is the de facto standard and adapt to that. Now that I feel comfortable with Dvorak I’ll switch between the two layouts more often. Once you get over that steep learning curve in the beginning, the “training” is just about doing things you normally would – write an article/essay/report, reply to mails and maybe chat with some good friends.

That’s about everything I wanted to say this time, hope you enjoyed it. If there’s interest, I’m thinking about writing more about Dvorak, covering topics such as:

94 Responses to “Dvorak – Two years later, was it worth it?”