Some screenshots from my netbook

I’ve had my netbook for about two weeks now, and I absolutely love it. It’s small and light, it looks great and it outperforms my old Thinkpad. It’s a Samsung NC10.

Since I don’t have a nice camera, you won’t see any pictures of the actual computer here. However, I’ll share some screenshots that I took yesterday while using the netbook – maybe other netbook users can find some inspiration?

Show me your desktop!

I like clean desktops. Desktop Environment is KDE 4.2, and the NC10 is running Arch Linux.

A cool feature of Plasma is that you can have several “desktops”, or activities as they’re called. Here are two other activities:

The activity name is pretty self-descriptive – I plan to use it for studies. No time to fool around!
Observant math addicts may notice that the calculator isn’t correct. I’m not very happy with the current one and plan to replace it with the Qalculate plasmoid once it’s been fixed for KDE 4.2.

My other activities might not be very newbie friendly – no icons on the desktop and no “start menu”. (How do I launch applications anyway? More on it later). This activity is for people who wants to borrow my netbook. The idea is to set up a keyboard shortcut that switches the desktop to this activity and also changes the keyboard layout to QWERTY.

So I hear it’s called Netbook 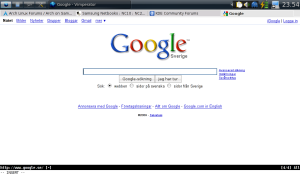 With a resolution of 1024 x 600, vertical space is very valuable. The default Firefox configuration takes way too much space. There are many extensions that can help you to optimize Firefox’ viewing area – just do a simple search on Google or check this thread.

As you can see, I choose the easy way – an extension that by default removes the menubar and toolbars. Much recommended to people who like Vim and/or keyboard navigation.

How do you launch applications anyway?

You probably understand that I prefer to use the keyboard by now. With KRunner mapped to Alt-Space, all applications are just a few keystrokes away. And it’s not only an application launcher – you can also search for files, open bookmarks, calculate expressions, switch between power profiles and much more. There are some nice screenshots of KRunner here.

Common applications, such as Firefox, are mapped to Win-<letter>.

As a bonus, you can also see that the laptop icon next to the clock is supposed to do.

Nothing very special here. Like most applications, Dolphin runs maximized and without window borders. This is done automatically with KWin and window-specific settings. Might add a close button to the panel once the new version of ActiveWindow Control has been released.

My first thought was to make the taskbar look like a tab bar, but there’s a small problem with the theme – the panel’s border separates the “tab” and application, thus completely destroying the “tab feeling”.

Playing games on the netbook

Yakuake is a wonderful terminal emulator and Nethack a wonderful game. They make a great combination.

Nope, I haven’t tried other games yet – if you wonder how well certain games run on NC10, I can only tell you “Nethack works just fine. For other games, you’ll have to ask someone else”.

However, I do use “Desktop Effects”, introduced in KDE4, and it works very well. Effects such as Slide, Desktop Grid, Cover Switch and Present Windows (see screenshot) run smoothly. The Cube is OKish.

Guess that’s enough screenshots for this time. Now I have to bring my white NC10 out and see how many people will ask if it’s a Mac or if the netbook is running Windows 7.

9 Responses to “Some screenshots from my netbook”